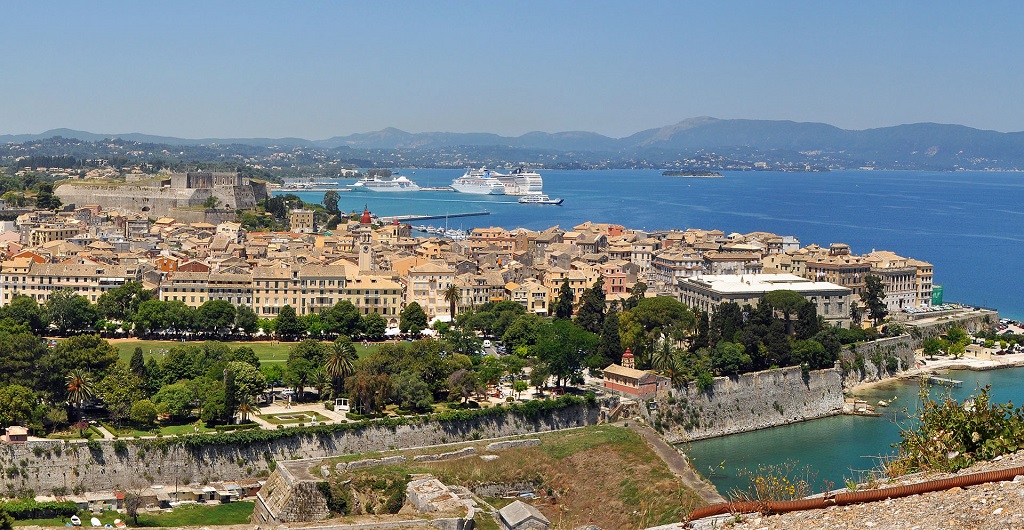 Corfu (Kérkyra), unlike the rest of Greece, never fell under the Ottoman rule. Due to the successive dominations of the Venetians, the French and the British over the centuries, the island has primarily become part of the Western rather the Levantine world.

Their culture wielded strong influence in the city: it was here that the first Greek University (the Ionian Academy), the first Philharmonic Orchestra and the First School of Fine Arts were founded. The sea, the sun and the wind have tastefully formed the island for thousands of years, creating an impressive coastline.

Beaches with golden sand or colorful pebbles, rocks in the place of sculptures exhibited at the most updated gallery, trees extending their shadow to the edge of the water. In the beautifully preserved Old Town of Corfu, a UNESCO world heritage site, Renaissance, Baroque and Classical repertoirecame to be successfully applied to local artistic traditions.

Palaces, fortresses, austere public buildings of the Venetian rule uniquely blend with lines of drying washing in tiny alleyways and small secluded squares. Strolling through a complex of narrow cobbled streets with stairways and vaulted passages, the so-called kantoúnia, will make you feel as if you’ve traveled to Genoa or Naples.

In the S part of the bay Ypsos there is small harbor Ýpsou, open N. It is protected by a curved mole that extends NE for 200 m and by a breakwater of rock ballasting that extends E for 35 m.

Harbor Kérkyras is formed in front of Kérkyra town and comprises the old harbor, which is mainly used for mooring by fishing vessels and pleasure boats, and the new harbor, which is the commercial and tourist port of the island.

The old harbor is formed W of jetty Mourágia and comprises a basin with quayed coasts for 185 m and depths of about 2 m near them.

The small harbor is open NNE, with an entrance opening of about 40 m. It is visible only when vessels are inside the cove Kassopéto.

Gouvia Marina is situated about 6 km from the town of Corfu and 7 km from the International Airport (IATA: CFU), on the south coasts of the bay Gouvia, in front of Kontókali settlement. It is considered the natural link between the Adriatic and the Mediterranean Sea as well as a port of call, to repose and enjoy the climate and the beauties of the island.

Korission Lake is an excellent place for bird watching. It is located in the south-western part of Corfu and provides an important ecosystem for a range of species, and a stopping area for migrating birds from Africa.

The Church of Saint Spyridon, patron saint of the Island, is situated in the heart of Corfu town just behind the Liston. The exterior of the church is typical of the Venetian architecture and its bell tower is the highest point in town.

The beautifully preserved Old Town of Corfu, is a UNESCO world heritage site, where Renaissance, Baroque and Classical cultures come together and fuse with local artistic traditions. Palaces, fortresses, buildings of the Venetian rule uniquely blend with the Greek architecture, small secluded squares and the so-called ‘Kantoúnia’ the vaulted passages that make you feel as if you’ve travelled to Italy.

The Achilio Palace is located in one of the highest spots of Gastouri village. It was built at the end of the 19th century when Empress of Austria Sissy was so excited by the island that she decided to built it.

After the village of Lakones, there is Angelokastro or Angles Castle or Castle Michel Angelo, which is a Byzantine fortress. The castle`s main purpose was to protect the inhabitants from the pirates and the Venetians.

Etrusco restaurant is one of the best restaurants in Corfu and among the top 100 in the world. Ettore Bottrini, the chef and owner of the restaurant has been the recipient of many prestigious awards in Greece.

Aktaion is located opposite the Old Fortress of Corfu. It provides amazing view to the Ionian sea, the bay of Garitsa and the old fortress.

Relatively shallow sandy beach. It is organized and visitors can rent umbrellas and sunbeds.

A beautiful resort beach, beneath the Pantokrator, with crystal clear water, brick and shingle. The beach is organized with boat hire facilities and a variety of restaurants and snack bars.

Left from the main beach in Sidari is the famous Kanali tou Erota (Love Channel), an opening in the rock in the sea, a tunnel. Tradition says that whoever swam in this passage, on the other side will meet the love of his life.

The cosmopolitan area of Paleokastritsa has many small beaches with pebbles and sand and picturesque rocky coves. It is also known for its deep and very cold waters.

One of the most popular beaches on the island due to its length and the golden sand. Despite the winds blowing at times near the beach it is sheltered.

Relatively quiet, sandy beach. The beach is organized with sun beds and umbrellas are also within walking distance of taverns and cafes.

Pebbled beach with deep waters that offers privacy and seclusion for guests and is accessible only by a steep winding road. The area offers several restaurants.

Considered one of the most beautiful beaches of Kekryra island. This is a small, sandy beach with shallow waters, which has sun loungers and umbrellas ideal for families and children.

This is a busy seaside resort with beaches, small inlets with shallow and safe waters, covered with sand and brick and surrounded by impressive cliffs. An ideal beach for families and children.

The Agios Spyridon is a sandy beach in a beautiful location, making it one of the most impressive of the island. Apart from the clear waters of nearby Lake is salty and fresh waters.

Pebbled beach which has wooden platforms and boat hire facilities for those wishing to explore the island by boat. The beach is fully organized and you will find restaurants, etc.

The beach of Agios Georgios Argyradon is wide and sandy with shallow waters safe for children, ideal for families. It has sun loungers and parasols.

Busy long sandy beach organized with umbrellas and sunbeds. It has a large variety of restaurants and other shops.

This is a long beach with sand and pebbles, which has sun beds, umbrellas and water sports facilities. The beach is very busy and the surrounding area offers a variety of restaurants, fast food restaurants and cafes.

Located near the town of Corfu and is so popular. It has sand and brick and is very well organized, and has piers, water sports and boat hire.

One of the most cosmopolitan beaches of Corfu which is located below Mount Pantokrator. It has pebbles and sand and is fully organized with sunbeds, umbrellas, cafes, bars and taverns.

Very popular beach with shallow waters, is covered with sand and brick and is located near the town of Corfu. It has docks, water sports and a wide variety of restaurants, cafes, bars and restaurants.

Sandy and quiet beach with a long deep water, near a river with fresh water. You'll find a few plants and some restaurants, ideal for those seeking peace away from the crowds.

Long sandy beach making it one of the most popular on the island. Glyfada frequented by youth as the beach has a bar and cafe.

Small and sheltered bay with sand and brick. The beach is organized with water sports, sun beds, umbrellas etc.

Beautiful, sandy beach. This is one of the quietest beaches of Corfu; the waters deepen gradually and is ideal for windsurfing.

Great beach with sand and brick. This is a popular beach with water sports facilities, restaurants, snack bars, etc.

Crowded beach because of the long and beautiful beaches. There is access as the beach is beneath the mountain Pantokrator.

Quiet beach with sand and pebble, ideal for relaxation. It has shallow waters which make it ideal for families with children.

Quiet and secluded beach with pebbles and water that deepens gradually. It has a pier, water sports and a few taverns and have access from downhill.

It is a sandy beach , one of the largest on the island. The water is shallow, ideal for children, while in the area you will find water sports facilities and a variety of restaurants.

It is crowded, long beaches and shallow waters ideal for children. It is well organized with umbrellas and chairs and a wide variety of restaurants and snack bars.

In the local dialect of Corfu 'Astrakeri' , is called the site, which has been covered by Astraka. This is an ideal beach for families because of its shallow waters and vast beach, not in length but in width, will delight children, especially on days when it blows, a common occurrence on the northern shores.

One of the most beautiful beaches of Corfu, with sand and brick. Located south of Corfu Town and offers water sports facilities and a wide variety of restaurants.

Sandy beach with shallow waters, safe for children - ideal for families. Located within walking distance from the salt marshes and has a variety of restaurants and shops.

Popular seaside resort with lovely beach. It has sand, pebbles and pebble and shallow waters ideal for children and families.

It is a quiet sandy beach, ideal for rest and relaxation. A variety of restaurants and snack bars nearby.

A fully organized beach with beautiful blue water and sand . It has sun loungers and parasols.

Ipapanti Cave is north from the famous Ermitis cliffs. It is an enormous cave, whose size allows boats to enter inside.

The cave is 22 km away from town of Corfu, but it is very close to Byzantine Fortress of Gardikiou. The Gardikiou Grava is a small cave, where tools, firestones and animal bones were found.

It is an amazing place hidden in the Ionian sea. Corfu`s golf course is one of the 19 greatest championship courses in Europe.