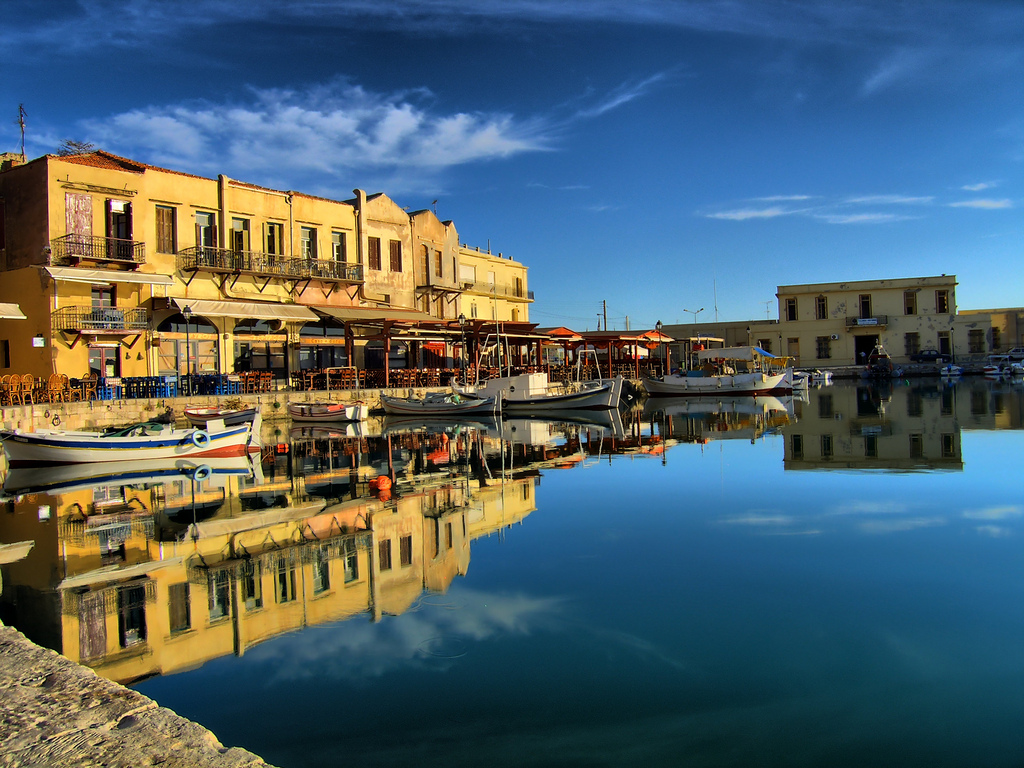 Rethymnon, on the north coast of Crete, lies on the island's longest sandy beach and is known as the hidden jewel of Crete. Since 1400 BC the Minoans, Venetians, Turks and Cretans have built their ancient cities, minarets, citadels, the hilltop Fortezza, winding narrow streets, fishing harbor and lighthouse which create an old-world charm.

Situated midway between Heraklion and Chania, Rethymnon is also only a short distance from the most spectacular countryside making it an ideal center to explore the island. Rethymnon, the only well-preserved Renaissance town in Greece, is famous for its literature and the arts.

It is a place of contrasts, boasting a long and remarkable history as well as untouched places of natural beauty and traditional life. This small Mediterranean town enchants you with its Old Town dating from the period of the Renaissance, its fortress and museums as well as its beaches.

The Archeological museum of Rethymno was founded in 1887. Since 1991 the museum is located in the center of the old town of Rethymno opposite the main entrance of Fortezza.

At the beginning of the old town of Rethymno an imposing Venetian fortress, known as Fortezza, is standing. Fortezza is the most important monument in Rethymno and it was built in the late 16th century.

Arkadiou Street, or Sabbionara, was during Venetian era but also today one of the most important streets of the urban fabric of the city. Lying in the heart of modern Rethymnon, it combines the oriental features of the Turkish period with Renaissance-style Venetian architecture.

Avli is one of the most famous restaurants inRethymno. All traditional dishes are made by organic ingredients and the restaurant has received many awards.

Located on the north side of the island and 10 km from the town of Rethymno. Great sandy beach is the beach of Platanias.

Follow the highway to Heraklion, just past the Scaletta will find a gas station ,immediately after turn right on a dirt road, after a while you're at the beach. A small bay with large cliffs right and left.

Scaleta Beach on the north coast of Crete, 12 km from the town of Rethymno. It is a beautiful long beach and offers a wide variety of services and activities.

It lies about 11 km away from Rethymno on the road to Heraklion. Large sandy beach with crystal clear waters.

The beach of Rethymno is 12 km long and starts through the city and ends in Scaleta, which operate large hotels located outside the city to the east side. It is a cosmopolitan beach with plenty of shops to suit all tastes.

The beach of Platania is situated about 6 km. east of Rethymnon.

Great sandy beach is the beach of Pigianos Kampos. There are several large hotels, but you will find some more isolated spots where you can swim in peace.

It lies 15 km from Rethymno to Chania and situated north of Crete. It is an organized beach with clear waters and fine sand.

The Missiria is actually a suburb of Rethymno, within walking distance from the city center, just 3 km to the east and on the long sandy beach. Access from Rethymnon is very easy with regular and frequent bus, taxi and rented or private cars and motorcycles.

Located 16 km west of Rethymno on the National Road Rethymno-Chania. This is a beautiful sandy beach on the North coast of Crete and therefore affected by the winds and northerly winds.

Beautiful sandy beach is just 2-3 km from Rethymnon. The beach has been awarded the blue flag.

The beach Gerani located 6 km west of Rethymno and is a bay with pebbles affected by the wind. This is a less organized and relatively quiet beach near the town of Rethymno.

If you like rock then this is your beach. In the town of Rethymno overlooking the castle.

It lies about 12 km away from Rethymno on the road to Heraklion. Large sandy beach with crystal clear waters.

The cave of Gerani is one of the most beautiful ones in the prefecture of Rethymno and in the whole of Crete. It is located 7 km west of Rethymnon, at the location Kamari and nearby Gerani beach.

Dolphin Diving Center was established in 1998 in the beautiful island of Crete. There areextensive possibilities to dive here.

The Atlantis team offers diving training with PADI standards for beginners as well as advanced training with diving excursions for experienced divers. There are no mass dives but safe diving in smaller groups with individual care.