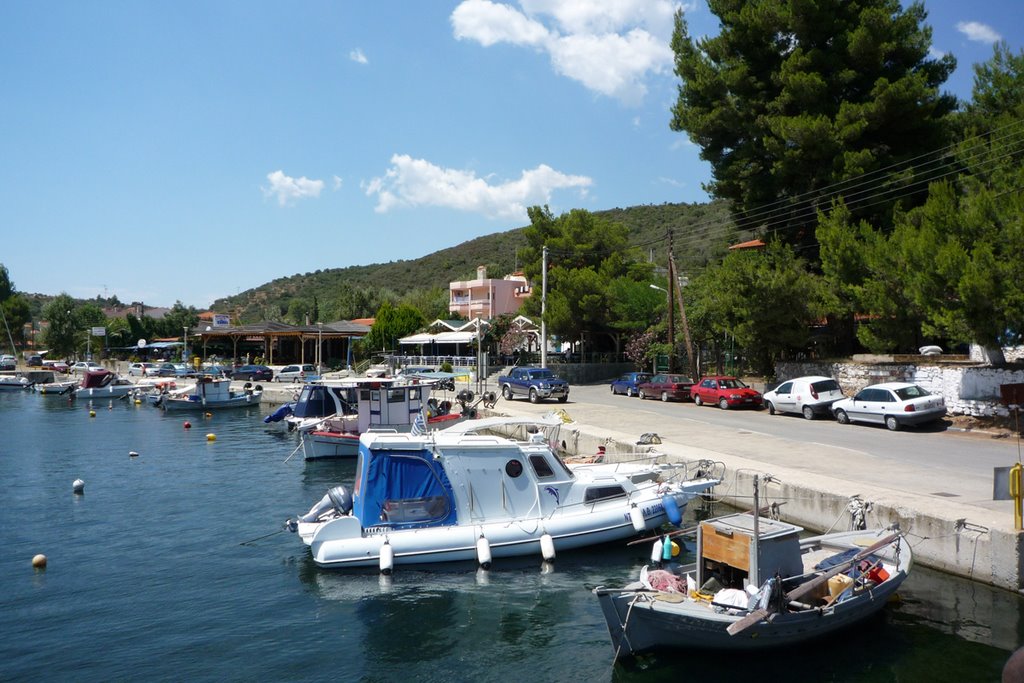 Port Koufó is a natural port, with irregular shape, and it consists of three smaller coves. It is open to the southwest. The width of the port’s entrance is 0.35 miles, and it decreases towards the inner part and reaches 400 meters in the middle. The village Koufós is located on the east coast of the head of cove Goúras.

Cape Spiliá is the west end of cove Goúras, while its east end is the northeast end of a cove located in the eastern part of the south coast of port Koúfo, the head of which lies 0.4 miles east-northeast from cape Pagóna. From the east end of Goúras cove the low and sandy southeast coast of the port Koufó extends to the southeast for 0.25 miles and forms a cove open to the northwest.

The penetration of the cove to southeast reaches 0.15 miles. Depths of less than 10 meters are located up to 100 meters off the cove. Further offshore the depths increase and vary from 30 to 40 meters in the middle. Inland of the head’s coast there is a small lake.

From the southwest end of the above-mentioned cove, the rocky and rugged south coast of the port extends to the west for 0.35 miles up to cape Pagóna, which is the southeast limit of port Koufó. A light is exhibited from the cape. The depths vary between 50 and 65 meters in the middle of the port.

Show/hide POIs based on their type:

At the point where the second “leg” of Chalkidiki ends, there is a narrow band of earth wetted by the sea on both sides. The pristine beach has fine pebbles and no form of organization making it ideal for those who prefer calmness.

The beach of Porto Koufo, is found next to the homonymousous settlement. The area has an impressive beauty, with huge rocks raised above a gulf, which resembles a lake, because of the small opening to the sea.

Toroni is a big sandy beach. At the various beach bars you can enjoy coffee, drinks or a snack with a free of charge sun bed.

The beach of Tristinika is one of the most beautiful and biggest in Greece. At the end of the beach you can find sun beds and umbrellas.

It is one of the most beautiful and biggest beaches in the region. With aquamarine waters, white sand and wild vegetation, it is described as idyllic and exotic.

The coast Aretes is a sandy beach with thick sand deeply penetrating into the sea when there is ebb. It is a big beach 60 meters in width and 600 meters in length with spotless waters in a green all around natural environment.