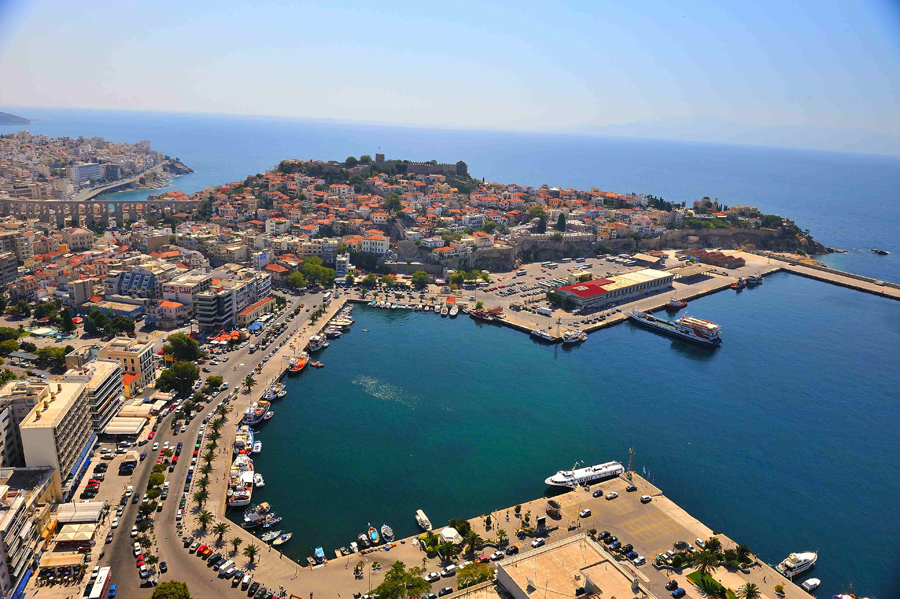 The port of Kavála is artificial and is located to the northeast head of the bay of Kavála. It consists of the main port and a less port at its northeastern head. The port is protected by two moles; the south one (which is 565 m long) and the north one (which is 225 m long). An entrance is formed in between, with a 230-m long opening, that is facing the west and her depths are between 13 and 15 m.

The south mole extends towards the west. Its outer part consists of natural rocks, whereas its inner part is quayed. The eastern quay extends from the root of the south mole to the northwest for approximately 381 m, with depths lying between 7.1 to 8.8 m. There are 5 Ro-Ro ramps of various heights alongside it, upon which ferryboats usually land.

Local fishing vessels and boats use the small port, which is located to the northeastern head of the main port. Its shape cannot be depicted. Its depths are between 1.1 to 4.3 m. The opening of its entrance, which is formed between the northern border of the east quay and the eastern border of the north quay, is approximately 143-meters wide.

The north quay is 260-m long, with nearby depths starting from 4.8 up to 7 m, and is used by flying jets. The north mole is covered with quay at its inner side. It extends towards the west for approximately 116 m. A light exhibits from its head. The depths are between 1.5 to 5 m.

Show/hide POIs based on their type:

When Apostle Paul dreamt of a tall impressive Macedonian man who stood in front of him and asked him to “come and pray in Macedonia” he decided to set sails for Neapolis. In winter of the year 49, Apostle Paul landed for the first time on the Greek mainland in Agios Nikolaos area closed to Neapoli (today’s Kavala).

The beach is located at 6 km from Kavala. It is a picturesque resort attracting crowds of bathers during the summertime and is a traditional seasonal center.

Located 2 km from the center of the city. Organized beach with cabins, showers and sports areas, but also with fish-taverns nearby.