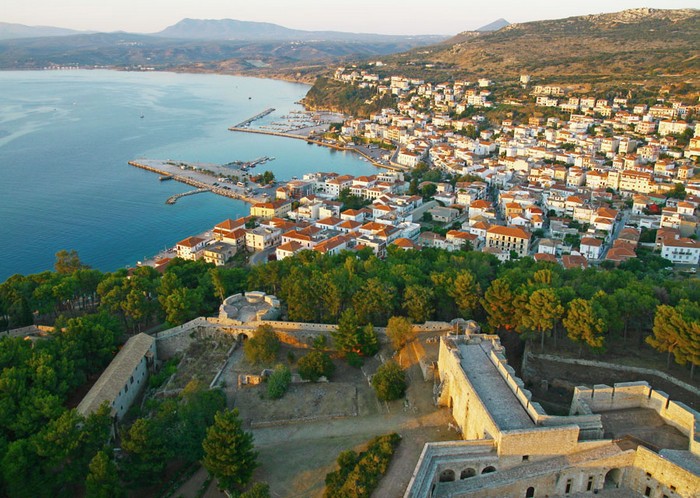 Pylos is a charming town in the southwestern part of Peloponnese. Its main square, called Trion Navarhon (Three Admirals), has residential buildings with neo-classical and modern architecture. The Antonopouleio Museum of Pylos, on the road to Methoni, houses the collection of the French Rene Puaux as well as exhibits from the Ancient Mycenaean, Hellenistic and Roman Periods.

On the coastal road you may visit the abandoned home of the Pylian Olympic champion, Kostis Tsiklitiras, a legendary athlete. Pylos is in a supreme geographical location while its port is one of the largest and safest ports in the world with 4.8 and 3.6 km in length and width respectively. The depth of the sea reaches 50 meters.

To the west, in front of the port is the island of Sfaktiria. The small island of Pylos also known as Tsichli-Baba or Fanari located to the south of Sfaktiria is the site of the monument built in. 1890 by the French Republic tin memory of the French who were killed in the Battle of Navarino. In the north part of Pylos, Voidokoilia Bay and the The Old Castle (Paleokastro) offer the majestic views of the Ionian Sea.

The Paleokastro played an important role in Pylos, but after the enclosing of the pass of Sykia by the Turks, its role was minimal as the building of the New Castle (Niokastro) took place in the south of the harbor. The Niokastro, built on the rocks was constructed in 1572 by the Turks. The visitor can see the Acropolis of the castle and the Temple of Metamorphosis Sotiros.

Entering the castle from the only useable entrance, there is a permanent exhibition in the first building to the left. The display includes a rich collection of paintings that give historical snapshots of the battle of Navarino, and also portraits and lithographs from the revolutionary period.

The collection was donated to the town by the philhellene Rene Paux. Between 1982-1987, Niokastro was renovated throughout its entire area and now it houses, inside the castle, the Hellenic Center for Underwater Archeology of Pylos.

The lagoon Divari, in north of Pylos, between the village Gialova and the bay of Voidokoilia is quite interesting both in an ecological and an archaeological manner. The area of 6000 acres is an important bird migratory location and hosts the Caretta-Caretta turtle and the African Chamaileonta.

Nestor`s Palace is located about 18 km north of Pilos town. It was built about 1300 B.

As you enter Methoni you will see Methoni beach, covered with small pebbles and view to the castle of Methoni. This beach is a good solution for a quick swim if you are in the area.

Romanos beach, is situated in Messinia, just beside the similarly called village. The beach is sandy and the waters of the Ionian sea are deep blue.

Sandy beach with crystal clear waters. It lies about 4 km from Methoni.

In the centre of Foinikounta you will find the beach of the village, always full of people. Beautiful sand and amazing water are the best reasons for choosing it.

It is the best Golf course in Greece.It is located in Pylos, Messinia.